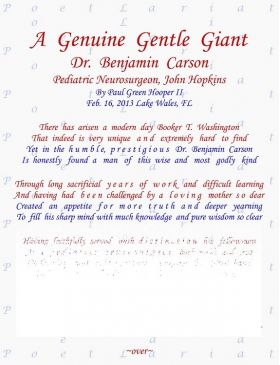 (continued from above)    The fourth couplet reads:    "Standing unashamedly for truth in a world gone awry,    Holding course in simplicity and yet truly most profound,    Men of this goodly stature humbly stand their ground and defy,    Oh may they increasingly multiply and surely abound."    Dr. Carson is a modern day Booker T. Washington.   As a political candidate,  his leadership role at John Hopkins pediatric neurology,  and his multi-tasking of many vital details,  along with his keen skills,  with such gifted hands,  all give him much practical experience of being a leader.

Editorial:   Dr. Ben Carson has presented himself as a candidate (May 2015),  for the Republican Party,  for President of the United States in 2016.   He gave his life's story,  and made earnest appeals:  for common sense,  limited government,  and rule of law  according to the Constitution.  He made clear his faith in America  as  One Nation under God,  indivisible,  with liberty,  and justice,  for all.   He demonstrated his positive attitude and wisdom.   A very good speech indeed!  Dr. Ben Carson not only is very knowledgeable with no doubt a stellar I.Q., but he is also possessed with much wisdom in the application of that knowledge.  Therefore his W.Q. (Wisdom Quotiant) outshines his I.Q. (Intelligence Quotiant).  We recommend him highly.  He is truly a Genuine Gentle Giant of a man, and leader of people.

Story behind this POEM:   I had seen the movie,  "GIFTED HANDS"  about Dr. Ben Carson's  life story  as the successful  pediatric neurosurgeon  with much pleasure.   Then I saw Dr. Benjamin Carson himself,  standing at the podium,  at the National Prayer breakfast,  and was impressed  with what he boldly,  without apology,  said ~ in the presence of the President of the United States.   It was soon after,  wnen I saw and heard  Dr. Carson interviewed  by Sean Hannity  on Fox News,   I immediately was stirred  to write this poem.